The number of wild boar that have fallen victim to African Swine Fever virus (ASFv) in Germany has exceeded 1,000. In an update from the German authorities the count is now at 1,016.

The first outbreak of the virus in wild boar took place in September 2020 in Spree-Neisse district, which is directly adjacent to the Polish border. Ever since it has spread to 4 zones in 6 districts, located in 2 states, Brandenburg and Saxony. Table 1 shows where all the cases are have been found so far. 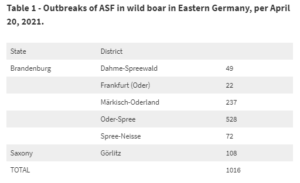 Germany has been trying to fight the outbreaks by creating permanent fences along the border rivers Oder and Neisse, which separates Germany from Poland. In addition, around the infected zones, Germany is creating so-called white zones in which all wild boar will be shot. That way the virus cannot escape.

Last week, Germany was promised € 9 million by the European Union. This money will for instance be used in Brandenburg and Saxony states to cover the costs of construction of the permanent fences.

In the meantime, Germany is trying to convince China to reopen its borders for pork coming from the other German states, as there is no ASFv in any of the other states. To that end, Germany’s minister of agriculture Julia Klöckner and her Chinese counterpart Tang Renjian recently held a video conference.

German agricultural title Top Agrar reported that Klöckner explained that the domestic pig population is still ASF-free and that the outbreak was locally limited in 2 federal states, only in wild boar. According to Klöckner, Germany is making considerable efforts with high pressure on biosecurity, education, hunting, testing and fencing. Both ministers agreed to hold concrete discussions on the ASF at expert level in both countries as soon as possible.