ASF Germany: A fragile balance at the border

Germany hopes that there will be no more African Swine Fever virus hotspots than the current 4. The country is therefore constructing a permanent fence to keep the virus out. With disease pressure rising in the winter months, it is a race against the clock, writes Pig Progress editor Vincent ter Beek.

Just over a week ago, the whole of Germany’s pig industry held its breath. Near the city of Potsdam, to the south west of the capital Berlin, a suspect wild boar carcass was found. To be certain that this was a case of African Swine Fever (ASF), the Brandenburg state laboratory sent the carcass to the national reference lab at the Friedrich-Loeffler-Institut (FLI).

In previous situations, early notifications of the Brandenburg’s state lab had always been correct, so there was no reason to believe this would be a false alarm. Yet it was – a ‘negative’ outcome was positive news this time, and in the morning of Saturday, January 9, my Twitter followers sighed of relief at that post.

If the FLI had communicated a ‘positive’ outcome, a jump westward of over 90km had fitted seamlessly into the pattern we have seen over the last 15 years in Eastern and Middle Europe. It is known that ASF virus spreads at a slow pace when it is in wild boar only. Yet humans are known to be the greatest assistants in helping the virus spread across large distances. That is how a 2nd Polish cluster came into existence in Western Poland in 2019, more than 5 years after it was introduced in Eastern Poland. And human behaviour most likely caused the emergence of hotspots in Belgium and in the Czech Republic.

ASF at the border zone: the Polish statistics

As is normal in winter, the number of ASF casualties always rises in wild boar. This winter it is no different. That can be seen well in Figure 1 below, where the number of cases in Western Poland have been plotted and ranked based on the moment of discovery. Information about cases found in late 2020 has kept coming in over the last week.

In December 2019, when ASF had just been discovered in Western Poland, a total of 126 carcasses was found. In the same month, 1 year later, at least 346 were found. With the most intensive months yet to come, it is clear that the trend moves up.

Since November 2019, the Polish authorities have communicated the discovery of 2,796 dead wild boar in the cluster in the west of the country alone. Looking at the situation near the German border, it is clear that infection numbers are rising there. In late 2020, numerous cases have been found around the Polish border town Leknica and pretty much the same is happening about 120km to the north around the border town Kostrzyn. 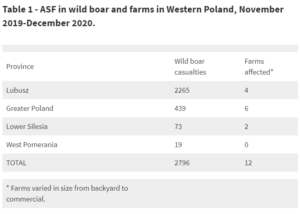 Many candidates for infection with ASF virus

Exactly that pressure makes Germany nervous, because there are plenty of 4-legged candidates for infection at the German side. Wild boar populations have been thriving over the last decade in Germany and the number of wild boar shot is usually a good indication of the population’s size. Over the last decade, numbers shot have almost doubled. In the most recent hunting season (April 2019 until March 2020) 856,000 wild boar were shot in Germany, which was the culmination of an upward trend from 440,000 in the season 2009/2010.

So it is good that the German authorities have been very busy with constructing a permanent fence along the rivers Oder and Neisse, jointly forming the border between Poland and Germany. In an earlier stage, sheep fences were placed to keep the wild boar out, but in practice, these formed no real obstacles to migrating boar, just like rivers being not much of a barrier to them.

ASF at the border zone: the German statistics

Keeping out more infections from Poland is necessary as the current ASF situation in Germany shows a growing trend. The most recent German data include the 1st positive carcass findings in 2021, leading to a total of 509 infected wild boar so far. As Table 2 shows, the middle of the 3 states, Brandenburg, is struck heaviest with 492 cases in 3 separate zones. In the south, Saxony state reported “only” 17 casualties in 1 infected zone.

The rising trend can be observed in Figure 2. Ever since mid-November, there have been quite a few weeks with the discovery of more than 40 wild boar per week. (The German authorities are currently busy creating white zones around these infected zones, in which all wild boar are culled to give the virus no chance to escape to roaming wild boar. Once the white zones are confirmed free of boar, hunters will enter the infected zone itself.)

In Germany, the construction of permanent fences at the border is not arranged at a national level but is the responsibility of the 3 border states, from north to south Mecklenburg-Vorpommern, Brandenburg and Saxony. Once completed, the total length of the fence for Brandenburg state will be 270km.

Currently, the state has completed the fence between border city Frankfurt an der Oder, all the way south towards the border with Saxony state, a stretch of 120km. North of Frankfurt an der Oder, towards the border with Mecklenburg-Vorpommern, construction is underway, and roughly 50km has been completed by now. The authorities stated that it is impossible to project when this task will have been completed.

Saxony state started the construction of its permanent fence mid-November 2020. As the crow flies, the border between Saxony and Poland stretches out over 80km. Seeing that the Neisse border river is meandering quite a lot, the eventual length of the fence here will be longer. This fence will be 1m high, so deer will be able to jump over it.

In the northern state of Mecklenburg-Vorpommern, a fence was taken into use late November 2020. This state has a relatively short border with Poland, only 63km, so it was easier to construct.

Will the fences keep out ASF virus?

Now the big question is – once the permanent fences are completed, will they be sufficient to keep the virus under control and protect Germany from the emergence of further hotspots? Obviously, you can never be completely sure. There are various ways the virus might break through.

A fence will never be 100% waterproof as there will always be (rail)roads breaking the fence. In addition, birds of prey or insects could be a mechanical vector of the virus in case they have been in touch with an infected carcass prior to flying across the border. And not to forget the biggest risk: us, humans. For them, no fence is too high.

Reducing the risk of ASF infection

Under normal circumstances, however, a permanent fence will sharply reduce the risk of further spread of the virus. As has been shown in both Belgium and the Czech Republic, the construction of permanent fences around infected zones, in combination with intelligent hunting, has worked in getting the virus under control – something that eventually positively affected pig markets.

That makes the construction of the remaining fence a true race against the clock. After all, the discovery of a random wild boar should no longer be making headlines.